Lovers of Spanish cuisine will be glad to know that they can now have a taste of authentic Spanish food at Arroz. The owner of ARROZ is Chef Victor Burgos who was formerly from Thyme. 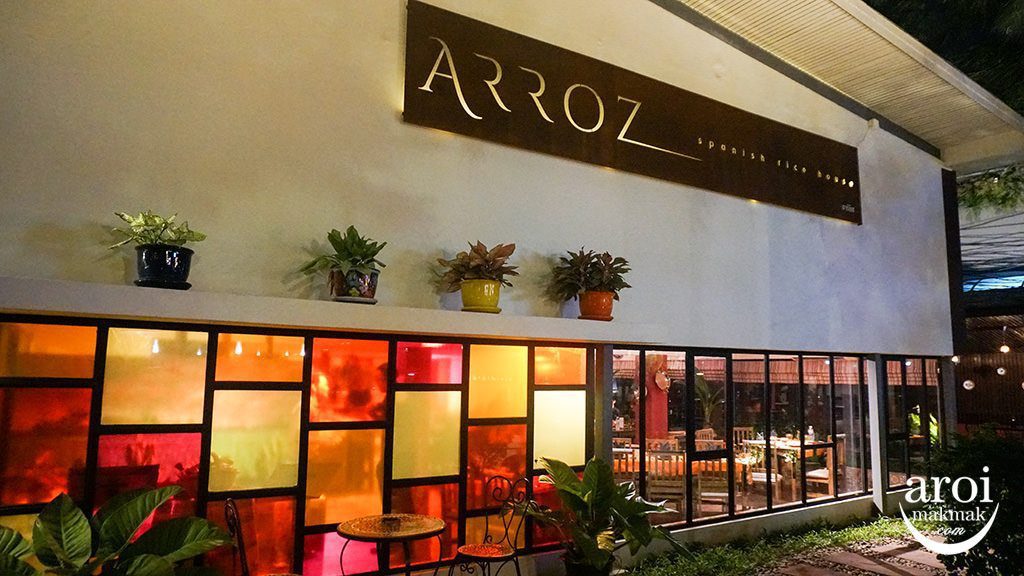 Arroz is located at Sukhumvit Soi 53 and the deco is rather rustic with lots of dark wood and colour window panels. 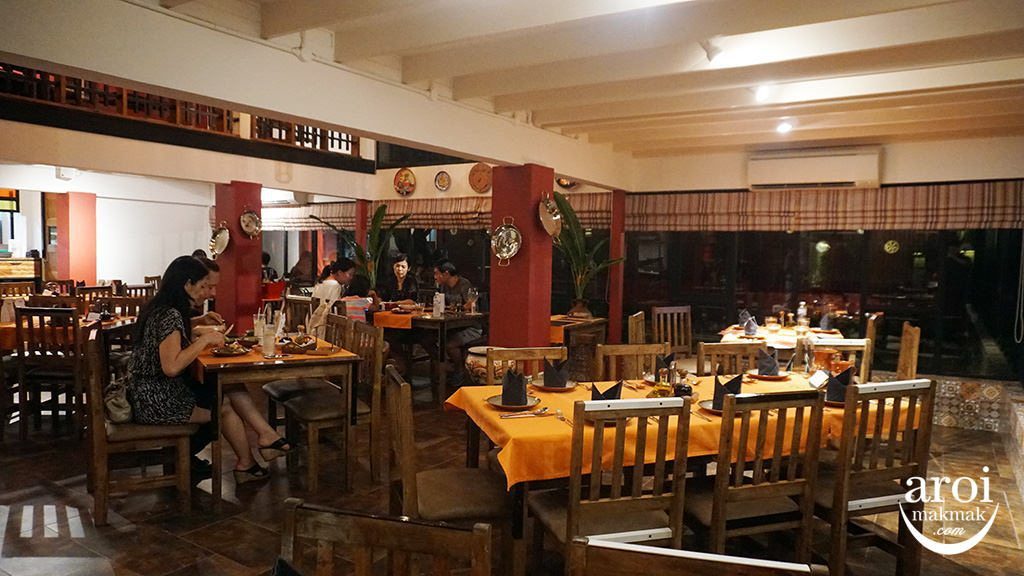 ARROZ means rice in Spanish but over here, it’s really much more than rice. 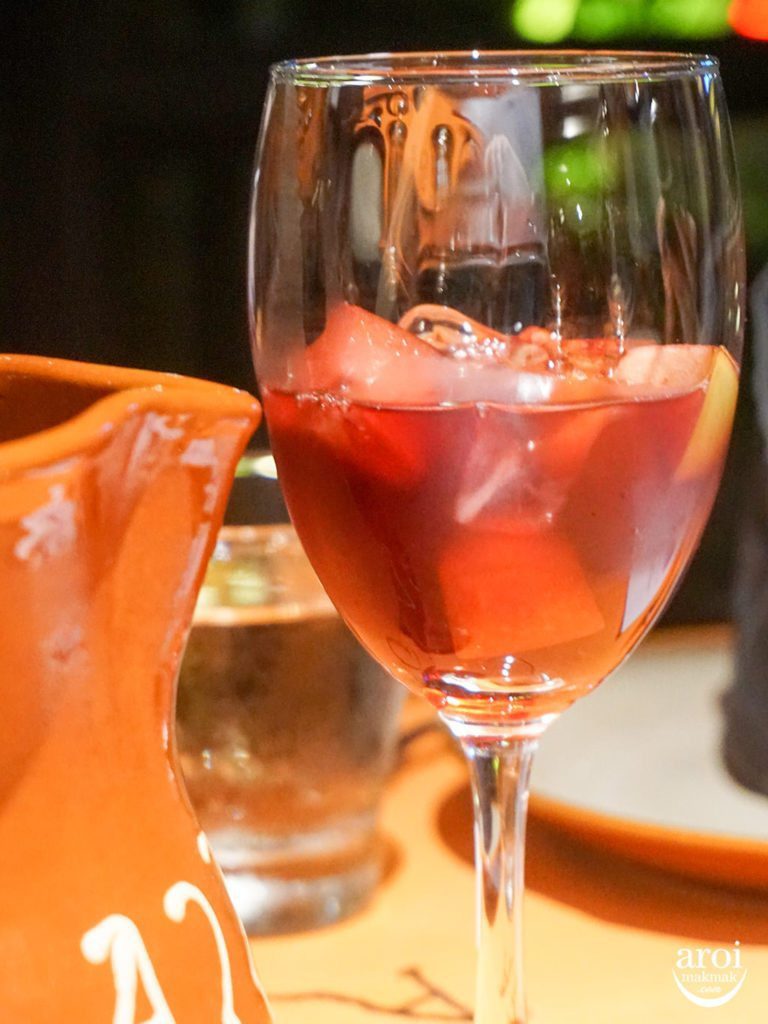 Being in a Spanish restaurant, it makes a lot of sense to go with Sangria, an alcoholic beverage of Spanish,   consisting of red wine and chopped fruits.

Let’s start off our meal with some tapas! 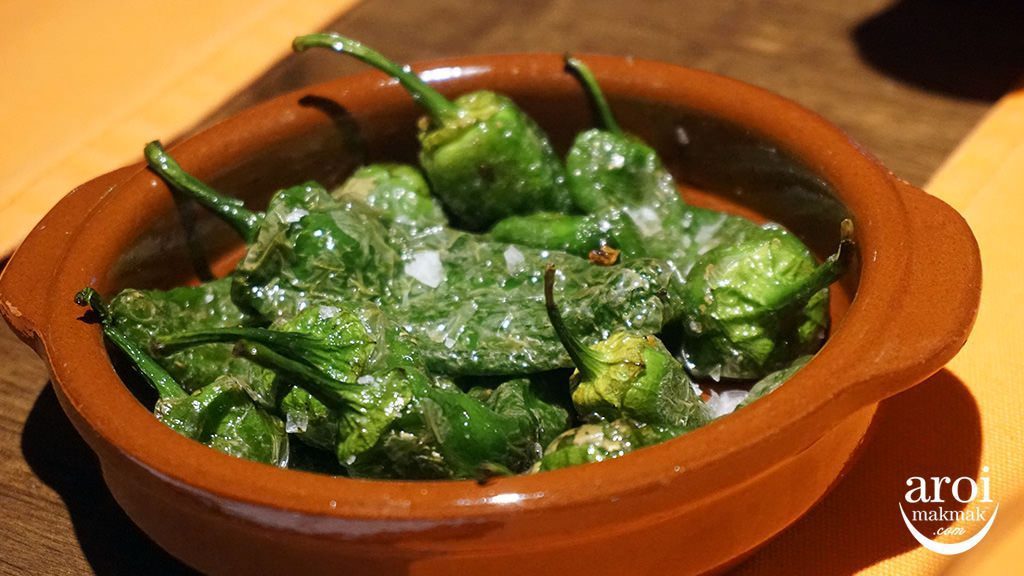 Padron Peppers [240฿] – A healthy snack before your meal and it can be quite addictive. 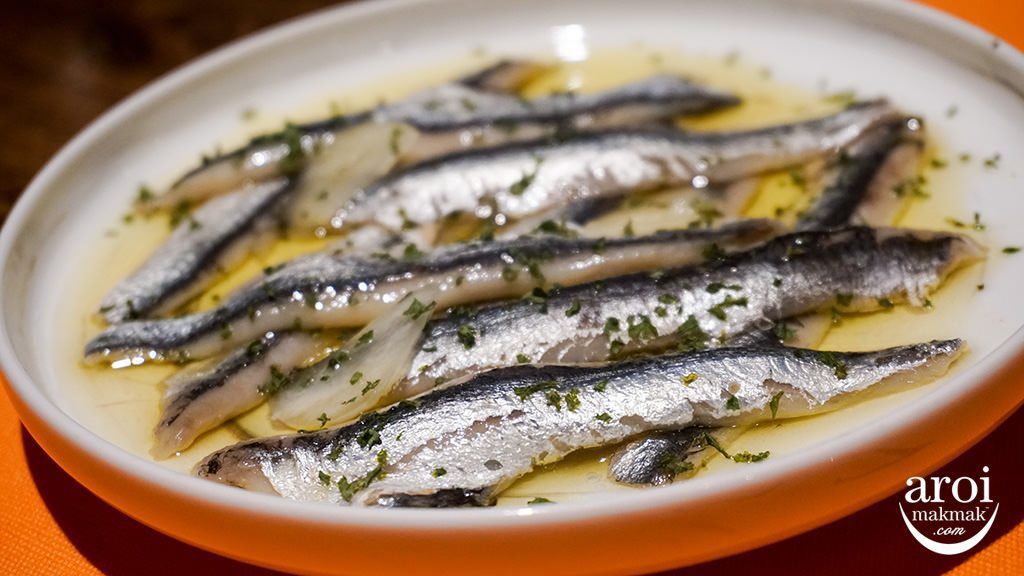 Boquerones (White Anchovies)  [650฿] –  Being marinated in vinegar, it gives a sour taste to it which was quite strong. I feel this dish requires an acquired taste. You either like it or dislike it. 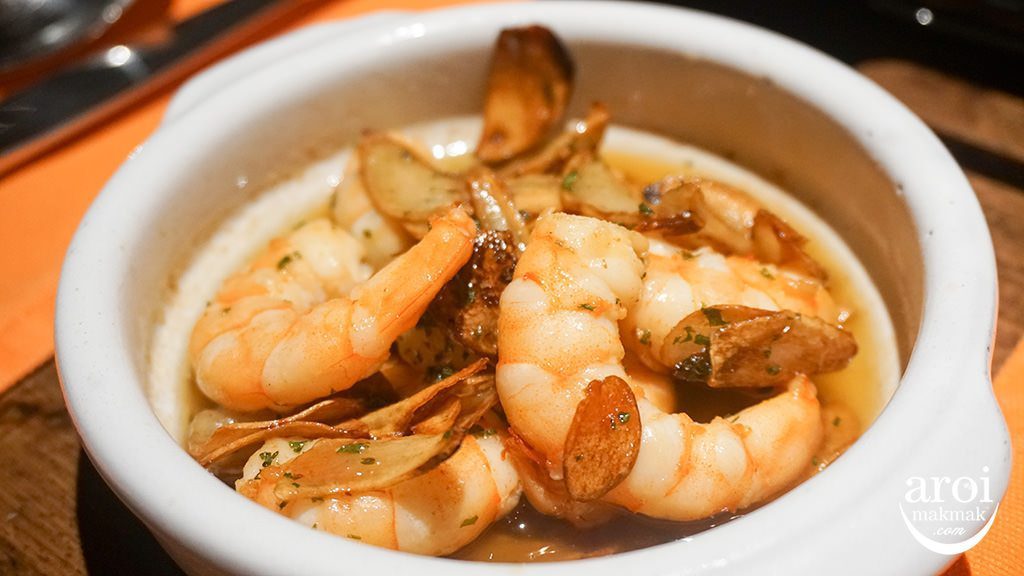 Garlic Prawns  [280฿] –   Everyone will love this dish unless you hate garlic. The prawns were fresh and the roasted garlic packs lots of flavour into the dish. It’s very addictive, one serving is probably not sufficient. 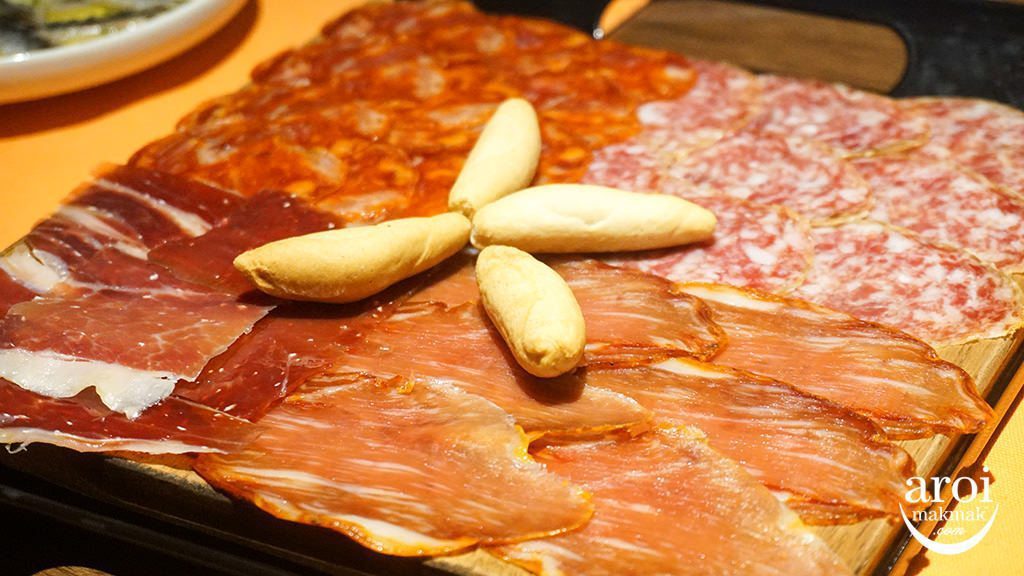 Iberico Cold Cuts Platter  [800฿ for 80gms] – Being imported from Spain, it definitely won’t go wrong.  Four different cuts and all of them were equally good. 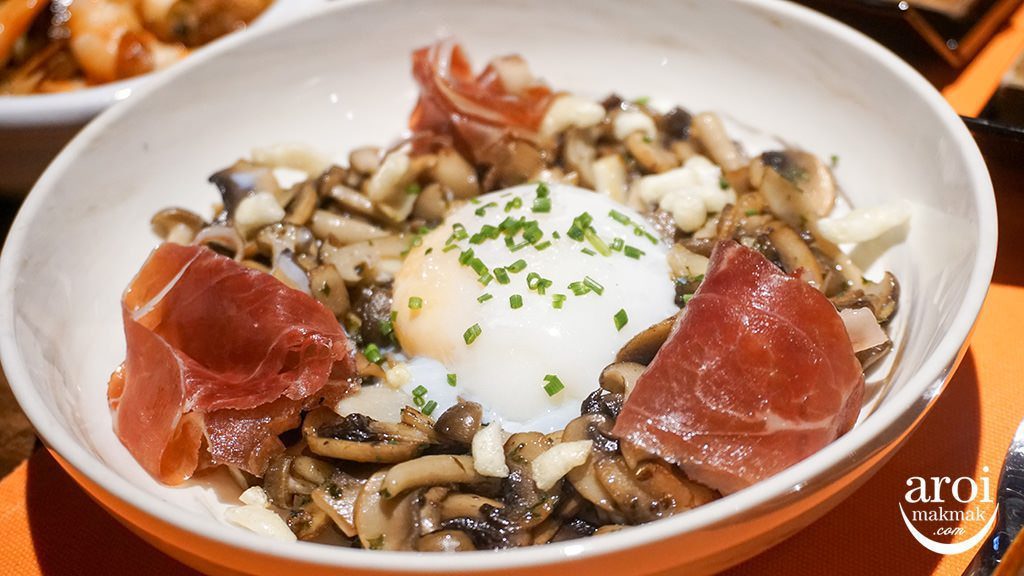 Sauteed Mushroom, Runny Egg, Truffle & Ham  [220฿] – Something healthier with mushrooms? The truffle gives an added flavour to the dish with a mix of textures when you eat it. 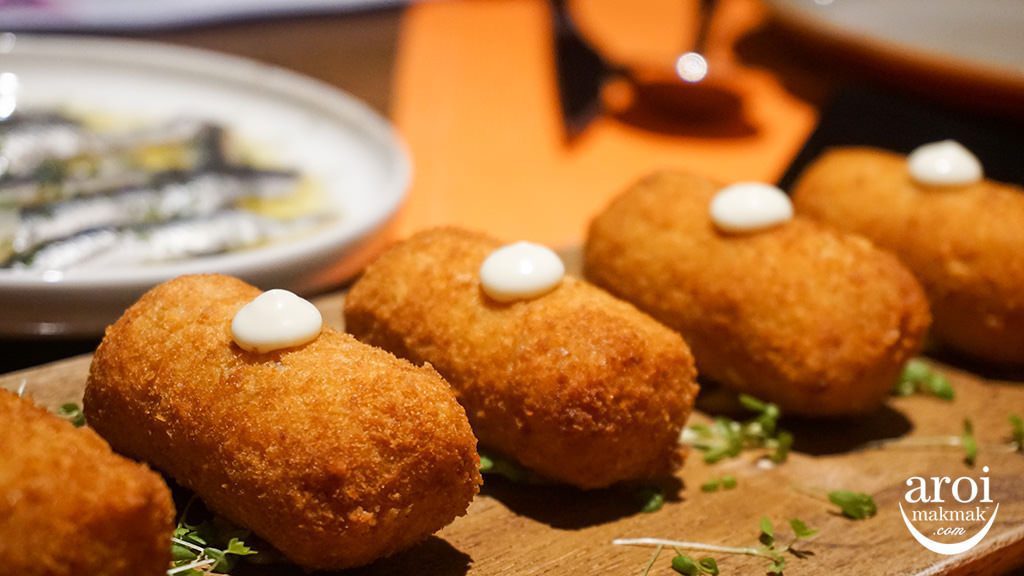 Iberico Ham Croquettes  [180฿] – Sometimes, we just need some fried stuff right? But beware, this can be quite filling. 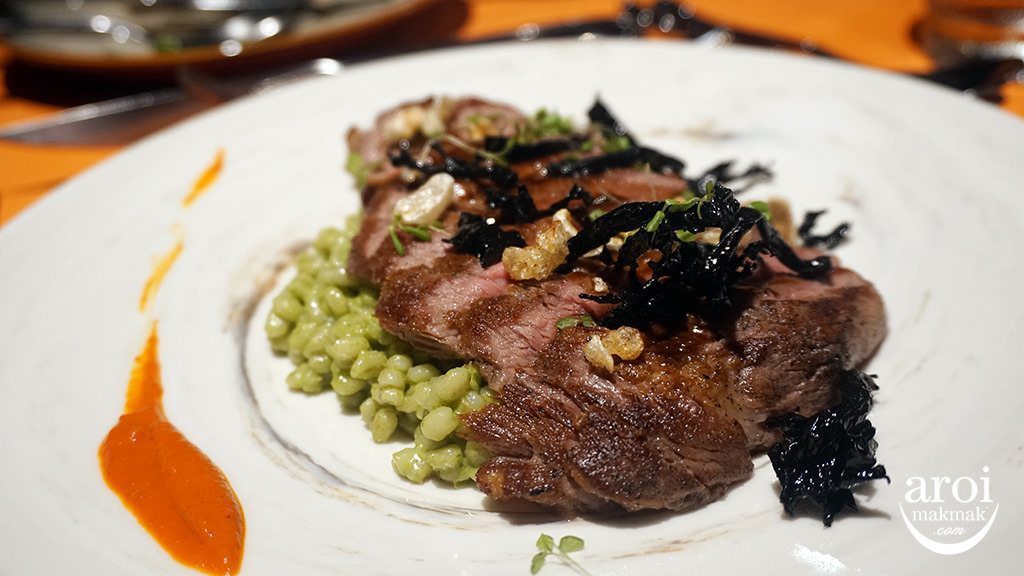 Grilled Iberico Pluma  [990฿] – Oh, this grilled pork is flavourful and tender, it almost feels as if I’m eating a beef steak! Sitting below the pork is actually creamy rocket barley and not rice! It’s my first time eating barley like this and it’s really quite unique. 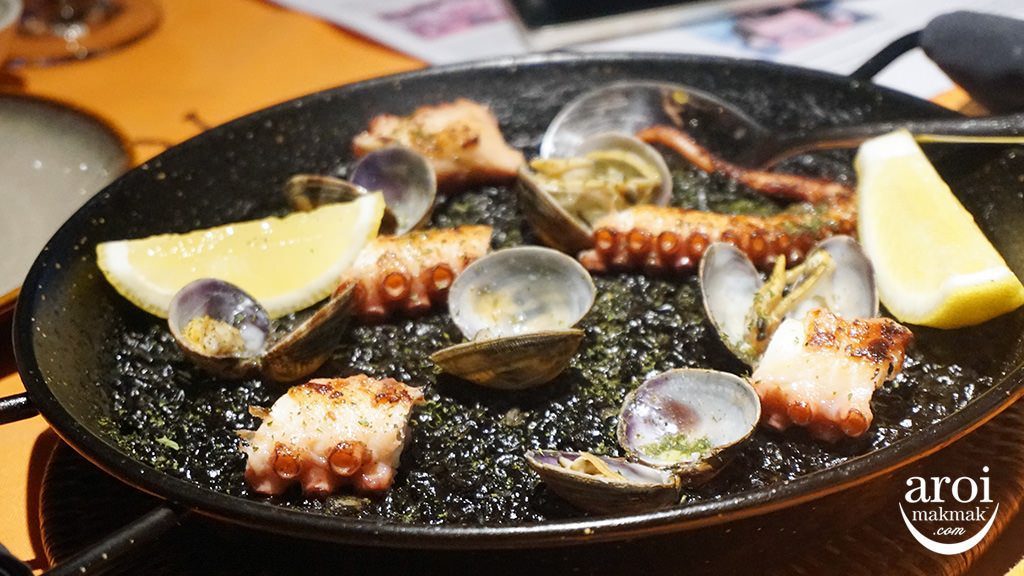 Squid Ink Paella  [1200฿(2 pax) / 2300฿(4 pax)] – Well, this is definitely the star of the night. The paella is packed with lots of flavour to it. The octopus was also a star on its own because it’s creamy and tender, unlike any octopus that I had tasted elsewhere. The paella really left an impression on us! 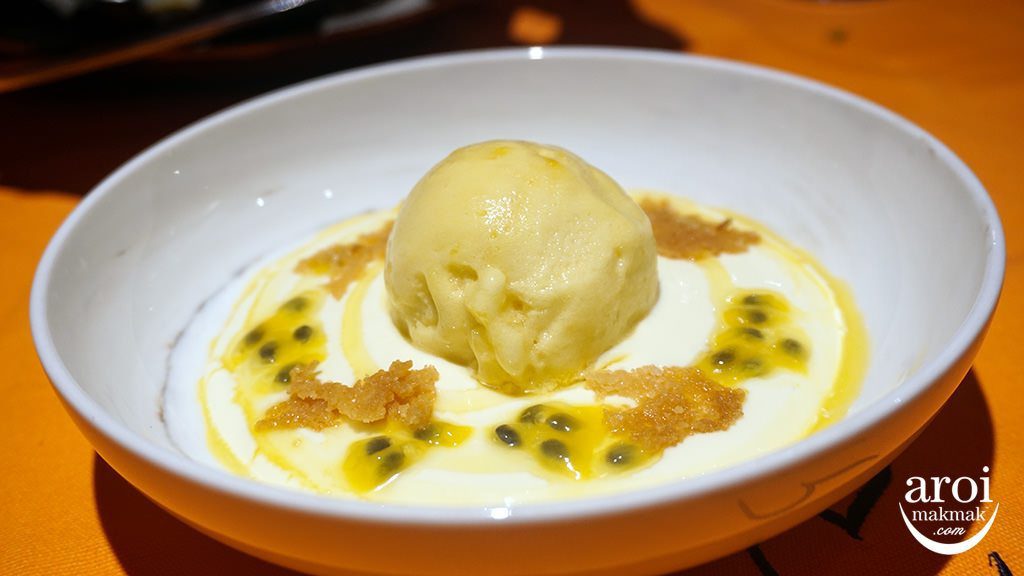 White Chocolate Ganache, Crumble with Passionfruit & Mango  [200฿] – Dessert time! I like the lightness of the Passionfruit  sorbet being paired with the sweet and creamy white chocolate ganache. So delicious. 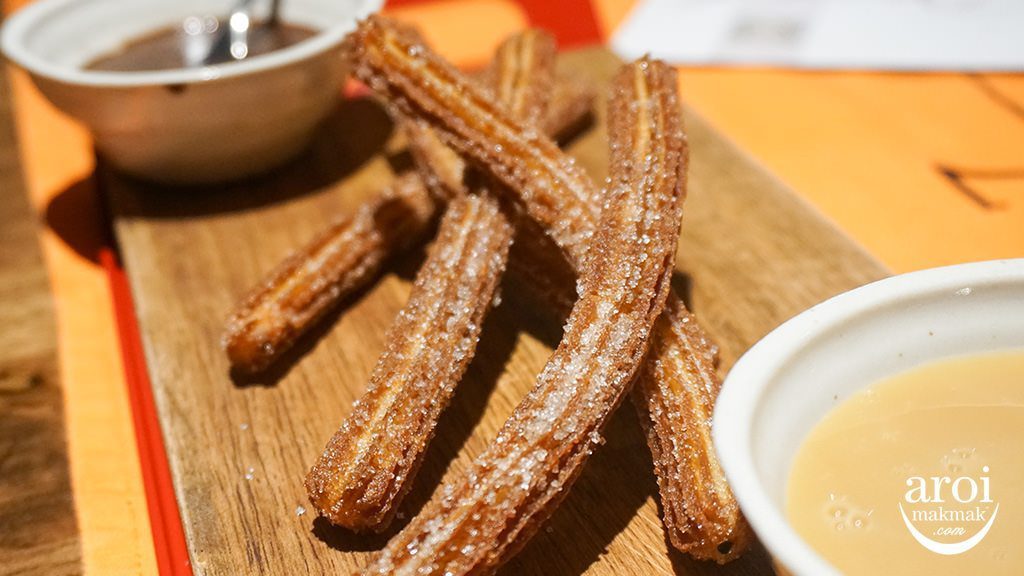 Churros & Chocolate  [250฿] – Everyone loves churros and I’m sure majority will make this their dessert choice. The churros here are considered mini version compared to what you get elsewhere. It comes with 2 dips but of course, I prefer the sweeter one because the chocolate was a little too bitter for me. 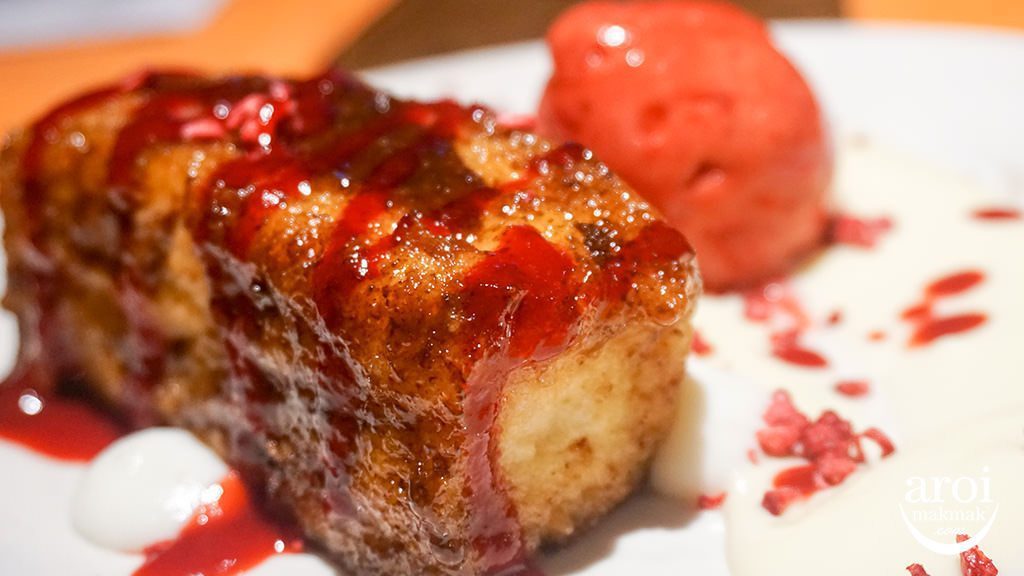 Torrijia Caramelized  [200฿] – French Toast with milk cream & raspberries. Being a lover of french toast, this was one of my favourites too. The french toast is not too dry but in fact a little wet in the middle which gives this dish lots of texture with a mix of sweet and sour.

With the majority of their ingredients being imported from Spain, the food is definitely authentic, done to give you a taste of Spain, with the reduction in salt in some dishes. Bookmark this page as it can be useful if you have cravings for some Spanish food!