Today’s recommendation is for those who love salmon sashimi. This particular Japanese/Korean restaurant will satisfy your salmon sashimi cravings at a very good price! 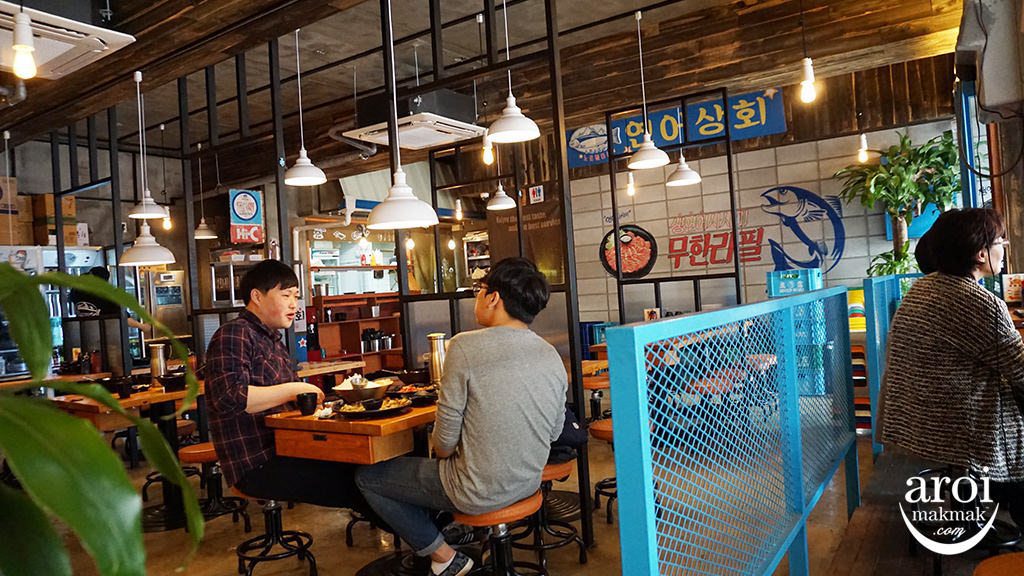 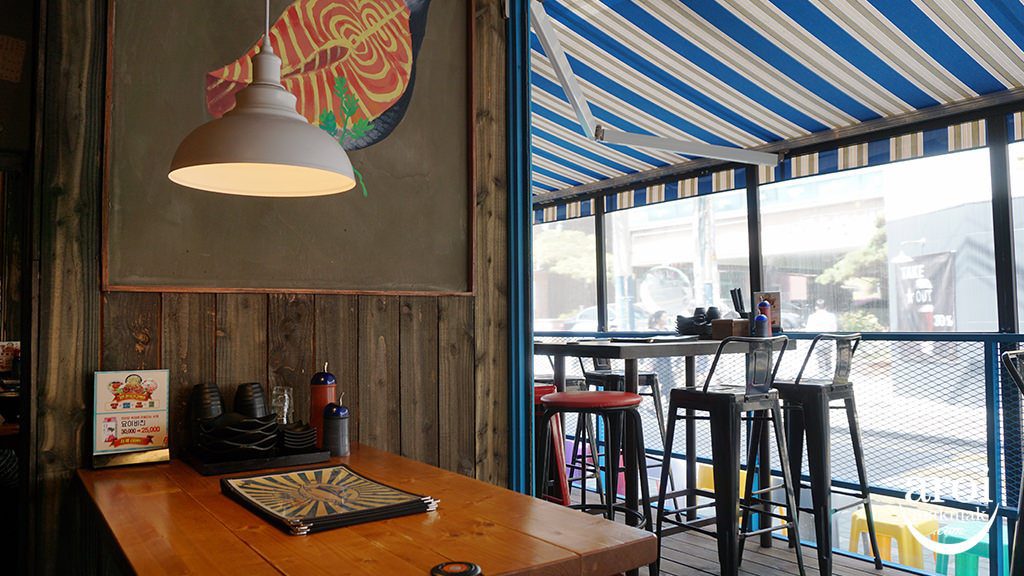 The second set has the addition of Salmon Sashimi Don (Rice topped with Salmon Sashimi). However, this buffet price does not include beverages.

For their Ala Carte menus, they have the following menus; 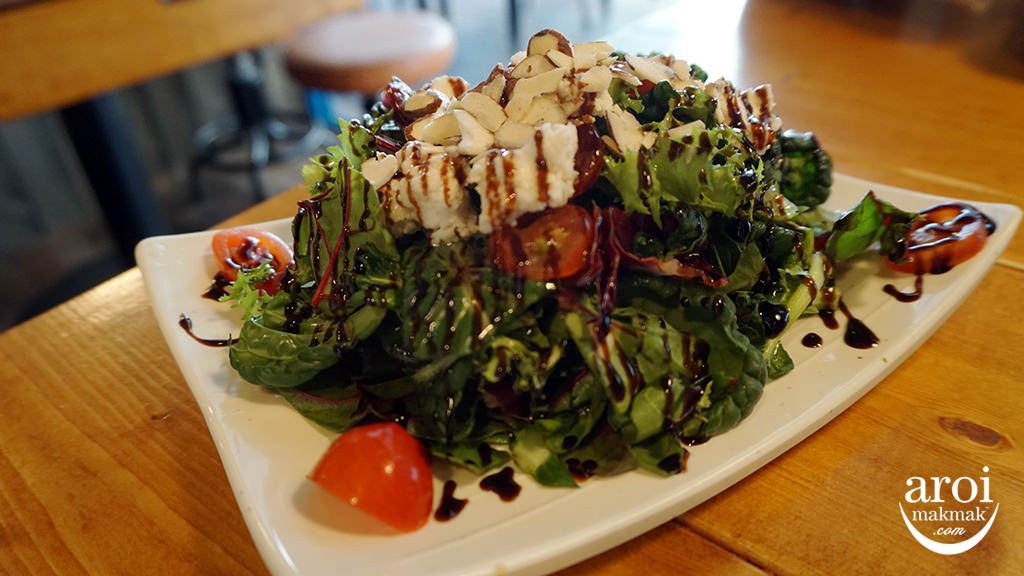 I have to say that surprisingly the salad is one of the best dishes here. It tastes really good and they give you a lot of almonds. The dressing is the balsamic dressing, giving a bit of a sour taste to the dish, and it goes along really well with the ricotta cheese. They give you a lot of ricotta cheese as well. The vegetables are also very fresh. 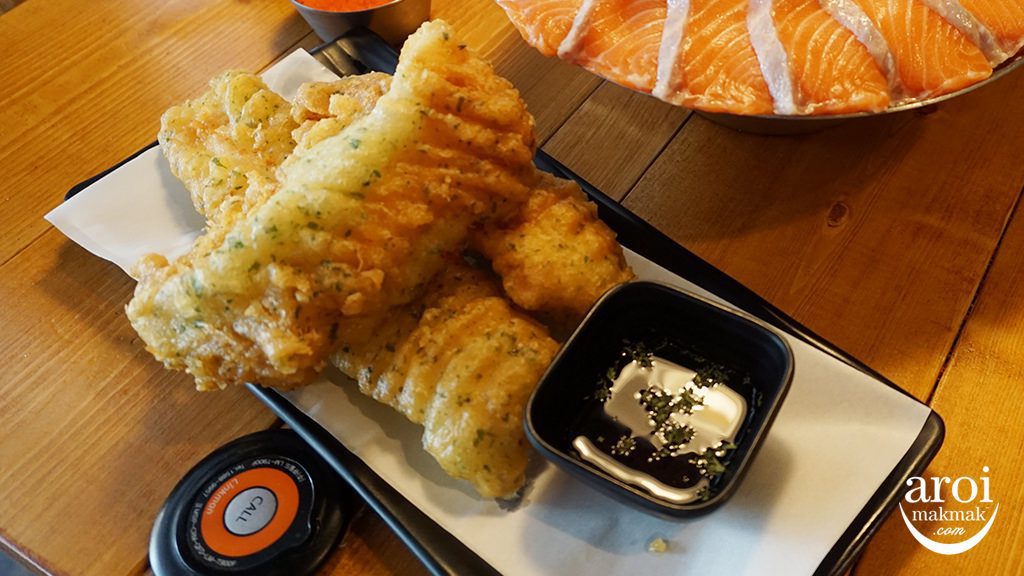 The second side dish here is the Fried Squid. The dish is also really big that you cannot refill it more than 2 times. Trust me, it really is! When you eat this side, you have to cut it into smaller pieces first. The batter is crunchy outside and very fluffy inside. 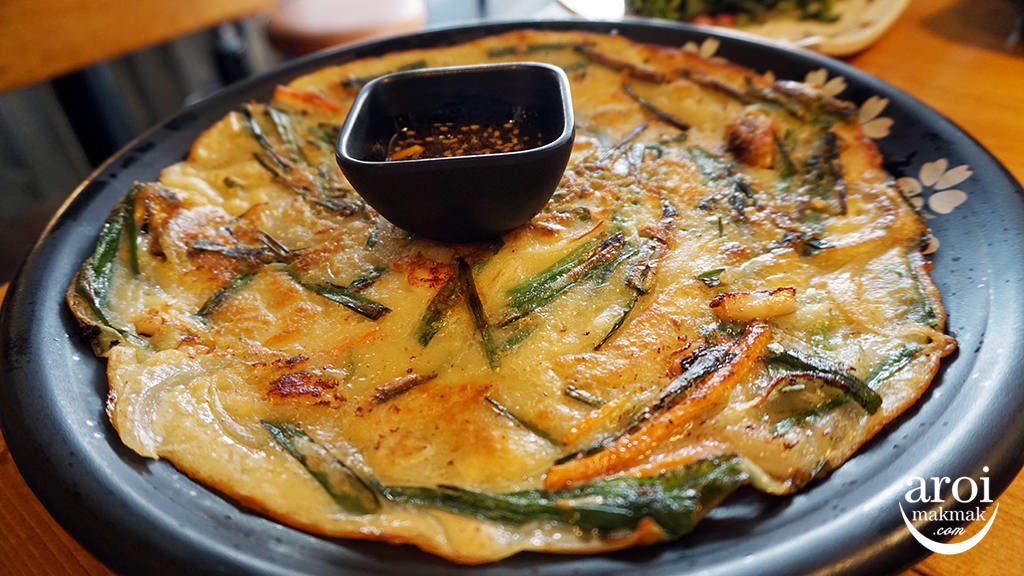 Our third side is the Seafood Korean Pancake (Haemul Pajeon). This one is served the size of a personal pan pizza. You also have to cut it into smaller pieces before eating. However, this is not really my favourite one because it is a little bit too greasy for me. But I also have to admit that the sauce that comes with this tastes really nice! It tastes like a more sour version of Shoyu. 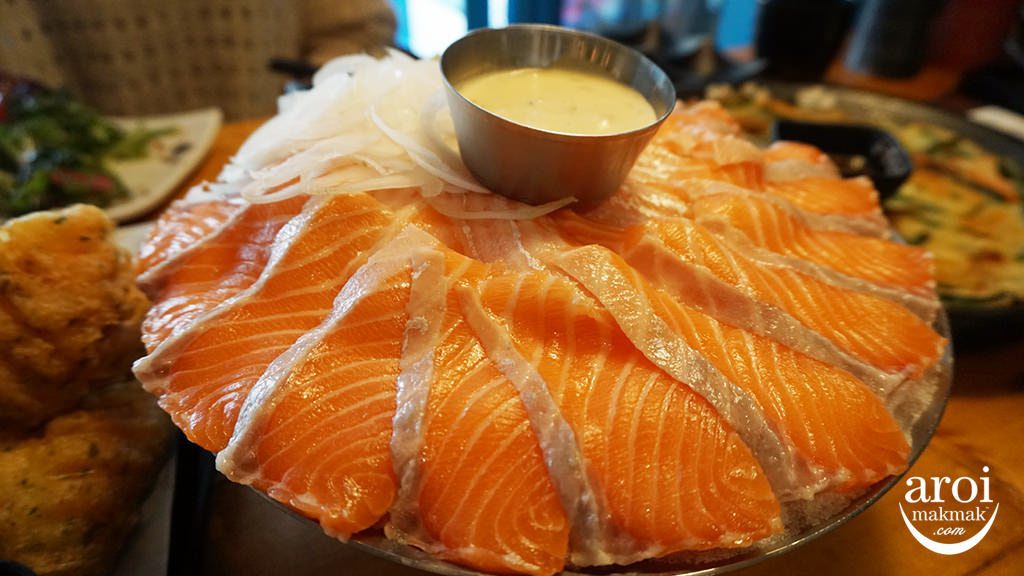 And here comes our highlight here! Salmon Sashimi. The salmon itself is really fresh. The size of each slice is not too thick and not too thin. The sauce that comes along tastes like tartar sauce that you eat with fish and chips. Surprisingly, it also goes well with Sashimi! The first set of Sashimi will come on top of the big ice bucket like this. However, when you refill them, they will come in smaller portions so if you come to this restaurant during peak hours, please tell the staff the specific amount you would like in your refill so that you don’t have to wait for a long time for the next refill if the portion is too small.

Overall, this is a great place to fulfil your salmon sashimi craving and hang out with friends at the same time, as they DO serve alcoholic beverages as well. Their alcoholic menus are Mango Muggolli, Cream Muggolli, Pine Apple Sherbet and Grape Muggolli. The price ranges from 7,000 won to 8,000 won.

So if you ever have a craving for sashimi, TRY this one out! :)

About the Author: Yo

Yo is a Korean-at-heart Thai girl. Born and raised in Bangkok, she is currently based in Seoul as an exchange student at Yonsei University. Her favorite activities to do in her free times are going to k-pop lives, dances and OF COURSE, HUNTING FOR GOOD FOOD. She also has an Instagram introducing her foodie life at @seoulexchangelife. Feel free to check it out! If you are the one who is looking for a good and affordable college kidsâ€™ style food in Seoul or sweet treats for the sweet-tooth, you are on the right track!